My ongoing internship with Global Bioethics Initiative (GBI), a not-for-profit international organisation in consultative status with the United Nations ECOSOC, has given me exposure to some pressing global health and bioethical issues through the 2018 International Bioethics Summer School, as well as to some of the 73rd United Nations General Assembly (UNGA) events.

During the week of September 24, 2018 I had the opportunity to attend some UNGA high-level panel discussions as well as hear some addresses of countries’ representatives under the UNGA General Debate.

Dr. María Fernanda Espinosa Garcés, the fourth female President of the UNGA, suggested the theme for the 73rd General Assembly as “Making the United Nations relevant to all people: global leadership and shared responsibilities for peaceful, equitable and sustainable societies”. To highlight a few, see descriptions below of some of the events we attended:

From Vulnerable to Protagonist: Empowering of Women Against Human Rights Denial Committed “For Her Own Good” – 25th September 2018

The High-Level side event highlighted specific programming and thematic priorities that uncovered both the dynamics of subjugation inherent in “protective sexism” and the denial of women and girls’ human rights, caused by physical and educational restrictions, gender-stereotypes, child marriage, Female Genital Mutilation (FGM), including the violation of the right to personal self-determination. The discussion further analysed and reviewed empowerment programs to promote best practices and strategies for positive and sustainable changes in gender power dynamics to create more inclusive societies.

The keynote speaker Michelle Bachelet, the UN High Commissioner for Human Rights, outlined the links between the death penalty, poverty, and access to justice for the disadvantaged in the context of implementing the Sustainable Development Goals and promote the rule of law and equal access to justice for all. The high-level discussion encouraged states to take appropriate actions to ensure the right of poor people to be legally represented in the criminal justice system avoid unfair and disproportionate sentencing. This was especially advocated by Mr. Ndume Olatushani, a former US/ Denver victim, who was wrongly convicted of felony murder in 1985 and spent 28 years in prison, 20 of which were on death row. The UN Special Rapporteur on extreme poverty and human rights, Professor Philip Alston presented some of the ways in which the civil and political rights of those living in poverty have been denied, restricted or deprived of real significance. In his 2017 UNGA special report, for the UN Human Rights Office of the High Commissioner stated: “few human rights actors have given anything more than sporadic passing attention to the civil and political rights of persons living in poverty”. He made an urgent call to eliminate generalized measures addressing human rights violations of the poor and further analyse the multiple factors, which render them particularly vulnerable.

The Power of Education to Prevent Racism and Discrimination: The Case of Anti-Semitism – 26th September 2018

Organised by UNESCO and in the presence of the UN Secretary-General Mr. António Guterres, the high-level event included the participation of the Prime Minister of Morocco, Saadeddine Othmani, as well as Ministers of Australia, Bulgaria, France, Hungary, Mexico, the Netherlands, Norway, Spain, and the United Kingdom. The panel discussion called for a stronger global action counteracting anti-Semitism, by discussing the vital importance of education for prevention and build the resilience of young people to hate speech, violent extremism. The Director-General of UNESCO, Mrs. Audrey Azoulay, insisted on the importance of all member states to work in close collaboration in order to tackle Anti-Semitism, using education as the best tool. She concluded anti-Semitism undermines fundamental human rights and the dignity of all human beings.

The events offered in-depth debates on the best strategies to achieve the UN’s 2030 Sustainable Development Goals.

We also attended the UNGA General Debate in which countries’ representatives presented various issues affecting their countries, insisting on the international cooperation and multilateralism as solutions. Many also reiterated the importance of the United Nations in its role as a pillar of an international system, questioning its imminent reform.

In line with Global Bioethics Initiative’s (GBI) educational mission and programs, the UNGA events I attended provided me with a broader perspective of some global issues and respective policies already presented during its 2018 summer school session in New York City. It also persuaded me on the crucial importance of youth engagement in the process of policy implementation needed to achieve the 2030 Agenda for Sustainable Development and its SDGs.

GBI fosters public awareness and understanding of bioethical issues and attempts to find solutions to global health challenges. In the recent past, GBI has also organised events relevant to the UN agenda, e.g. a conference held in New York City (April 13-15, 2018), titled “Age and Longevity in the 21st Century: Science, Policy, and Ethics”.

The three-day conference offered a unique opportunity to call attention to the impact of new technologies on the global issues surrounding ageing and longevity. The conference expert facilitated discussions, included a panel, “Advancing the Policy Debate on End of Life Care,” held at the United Nations Headquarters in NYC, under the auspices of the Permanent Mission of Romania to the United Nations.The topic of the long-term and end-of-life care has also been a focus topic of the Ninth Working Session of the Working Group on Aging, held from 23-26 July 2018.

GBI’s involvement with policy makers at the United Nations (UN) and its agencies’ level highlights the impact the organization attempts to have on the intersection of ethics, medicine, biotechnology, human rights, and public policies designed to limit the toll of sickness, suffering, and premature death among vulnerable populations globally. With the United Nations 2030 Sustainable Development Goals aiming to achieve a better and more sustainable future for all, there is a genuine connection between GBI’s vision and programs and its UN consultative status. 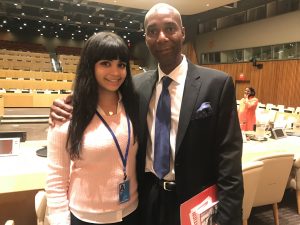 Rasita Vinay with Mr. Ndume Olatushani, a former victim of being wrongly convicted of murder

Rasita Vinay is a current Master of Bioethics student at Monash University, Australia, having previously completed her Bachelor of Science (Neuroscience) at the University of Melbourne. She is an intern for Global Bioethics Initiative and is hoping to expand her bioethical knowledge to obtain a more global perspective.